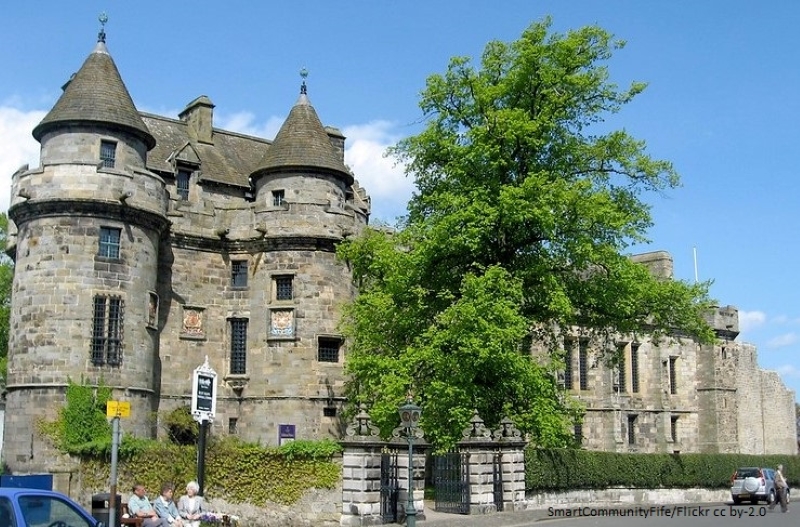 Located in the Fife village of Falkland, about an hour’s drive north over the River Forth from Scotland’s capital city of Edinburgh, Falkland Palace has historic royal connections going back beyond the 12th century and saw most of the early Scottish rulers and the later Stuart monarchs. Originally a hunting lodge and later a castle, the 16th century Palace of Falkland was inspired by the grand châteaux of France and it was the Stuart monarchs James IV and his son James V who transformed this favoured retreat of the royal Stuarts into a fine example of Renaissance architecture. King James V, father of Mary, Queen of Scots, died there in 1542 and when Mary herself returned from her time in France she came to Falkland Palace as often as she could whilst carrying out her royal duties as Queen. 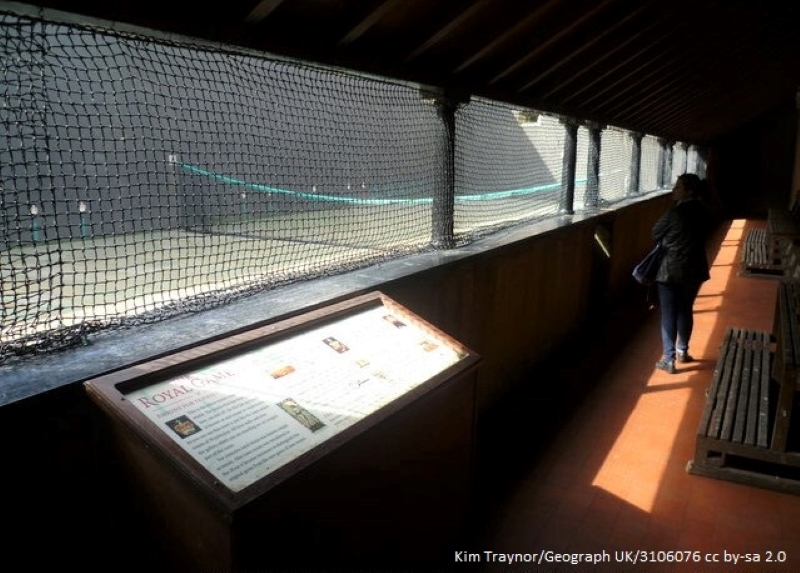 The surrounding countryside was kept as a private hunting estate where members of the royal court and favoured guests would hunt wild boar and deer and fly falcons over the hills. As you explore the spectacular Renaissance architecture of what was, in effect, the country residence of the Stuart monarchs and walk around the magnificent gardens and orchard where you will find Britain’s oldest original real (or royal) tennis courts, the roofed spectator area of which is home to a number of nesting swallows during spring and summer (you may need to duck when they come flying in and out!), you will come to understand why this palace was a royal favourite. In the gardens you can still find some remnants of the 12th-century Castle. 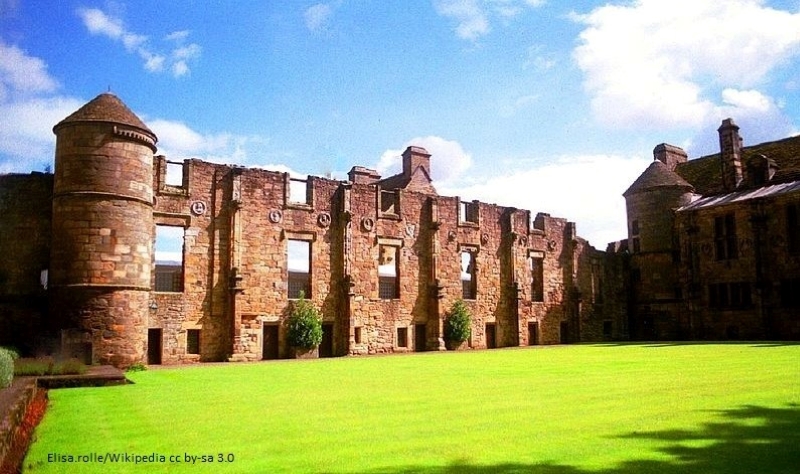 Sadly, in 1654, a fire partially destroyed the palace during its occupation by Oliver Cromwell’s forces, and it was allowed to fall into a state of disrepair. It was saved from total ruin some 200 years later by John Crichton-Stuart the 3rd Marquess of Bute who bought the estate and carried out a programme of restoration giving it a new lease of life. Work was done on the gatehouse, the south grange and the cross house. Parts of the palace are still in ruins but the original and reconstructed rooms contain 17th-century Flemish tapestries, elaborate painted ceilings and antique furnishings. The palace also has its own chapel. 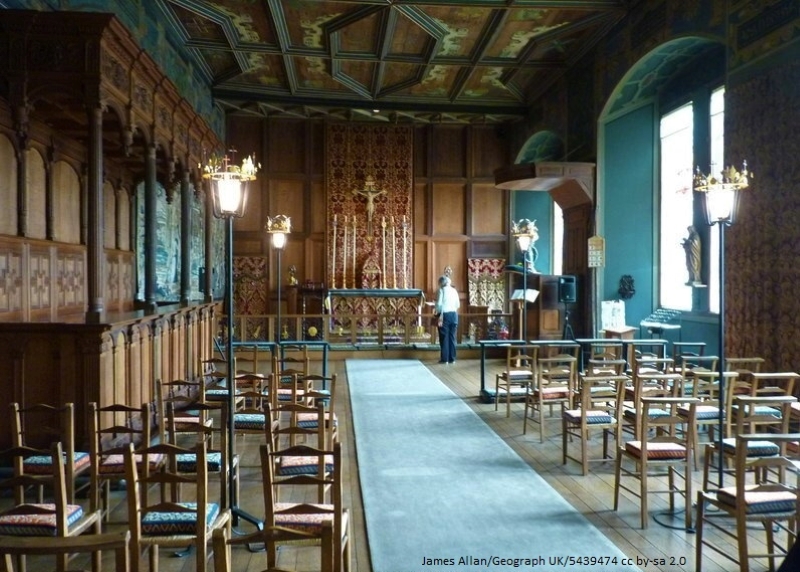 Although still owned by the Crichton-Stuart family, Falkland Palace (a Scottish Tourist Board 4-star visitor attraction) is now in the care of the National Trust for Scotland and guided tours start at regular intervals. Pre-booking is not required. Tours start from East Port through the impressive entrance archway with the keeper’s rooms and then on to the King and Queens’ bedchambers, the old library, the bakehouse and the tapestry corridor. The guides are knowledgeable and friendly and once you have toured the palace you are then free to wander through the gardens (don’t miss the glasshouses) following in the footsteps of royalty and admiring the palace from the outside. Exit is best made through the gift shop from where you are returned to East Port just a hundred meters or so away from where your tour began. 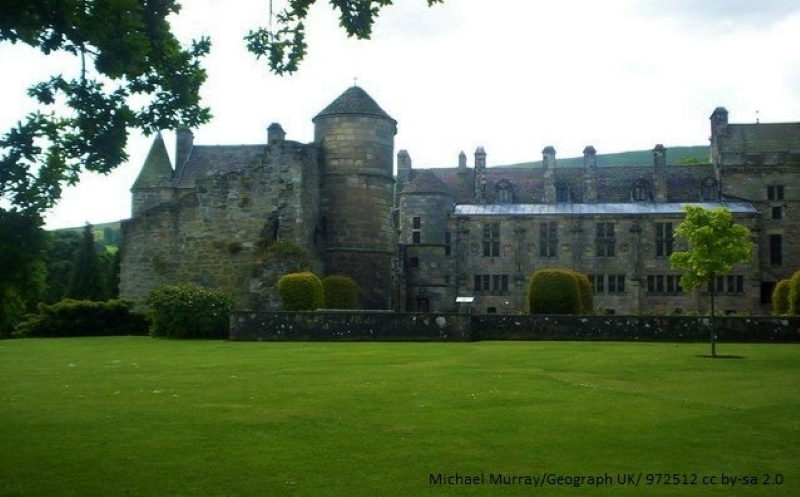 But don’t just hurry through the shop! Stay a while and browse the well-stocked displays of Scottish history books, arts and crafts, delicacies like Scottish tablet (once tasted never forgotten), highland toffee (mind your fillings) and whisky marmalade (the breakfast spread of kings). You might buy yourself an ornamental spurtle (look it up) and, of course, this being Scotland you simply cannot leave without treating yourself to a miniature or two of malt whisky! 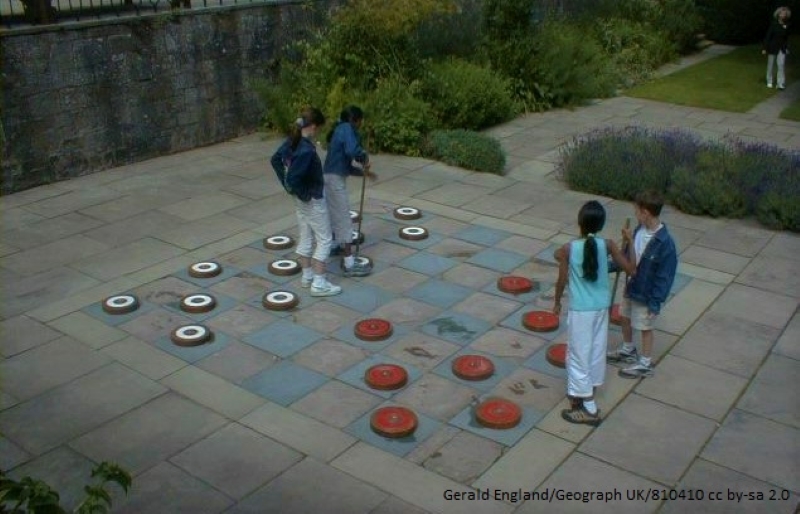 Actually, once you’ve toured the palace, the village of Falkland (Scotland’s first conservation village) is well worth a look. It has many interesting and historic buildings some of which have appeared in various movies over the years. Keep your eyes peeled for the ‘marriage lintels’ which appear in various places on several houses near the palace – they are an interesting and revealing insight into life in medieval times. The village also has hotels, bars and coffee shops where refreshments may be had.

Falkland village can become very busy during the tourist season – the palace is a popular attraction – and, once the main car parks are full, parking can be problematic so an early arrival would be a good idea. There are many companies who organise bus tours or private tours of both the village and the palace which will relieve you of the hassle of finding a parking space. Whichever way you choose to visit you won’t regret spending a day following in the footsteps of Scottish royalty!