In 1952, just after the death of her husband King George VI, Elizabeth Bowes-Lyon, better known as ‘The Queen Mother’, bought the 450-year-old abandoned Barrogill Castle in the far north of Scotland as a place where she could relax away from prying eyes. She oversaw the restoration of this remote castle on the north coast of Caithness just six miles from John O’Groats for use as her holiday home. 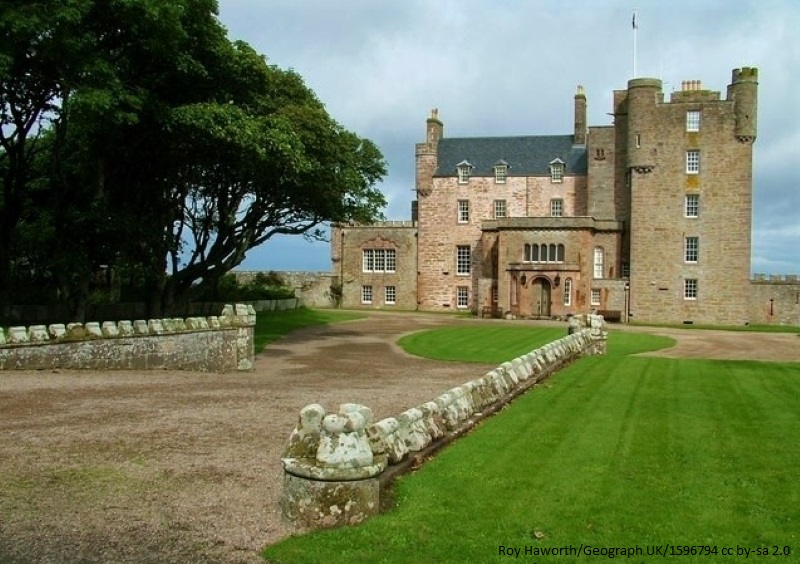 Choosing many of the fixtures and fittings herself she returned the castle to its original name of The Castle of Mey and took vacations there for three weeks in August and ten days in October each year until her death in 2002. Some years before she died she had the foresight to establish the Queen Elizabeth Castle of Mey Trust to oversee the future affairs of the castle and it’s because of her forward-looking attitude that it is possible today for the public to visit the castle and explore the wonderful gardens which she designed. 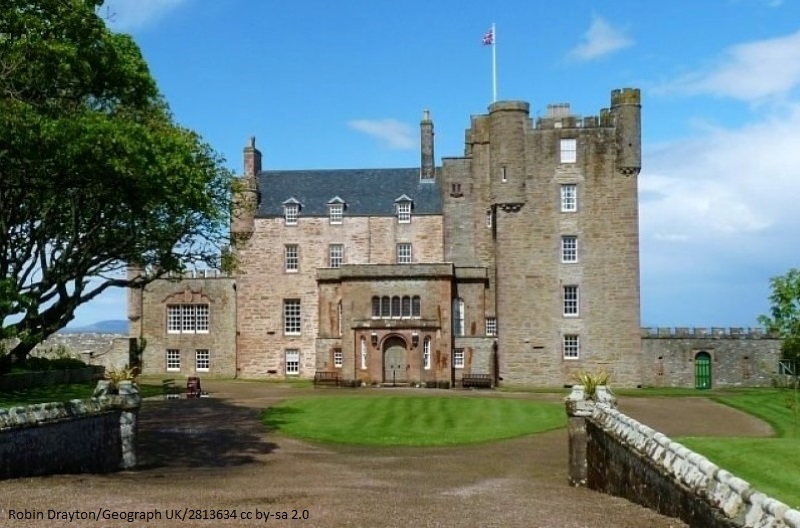 The Castle of Mey is the northernmost castle on the British mainland and, protected by a 12-foot high wall known as ‘The Great Wall of Mey’, is now under the care of The Prince’s Foundation, an educational charity established in 1986 by Charles, Prince of Wales. The castle stands on a slight rise about 400 yards from the sea with magnificent views over the Pentland Firth to the distant Orkney Islands. Once the seat of the Earls of Caithness the castle is open every day from the beginning of May to the end of September with a break of 10 days in July/August when His Royal Highness Prince Charles (president of The Prince’s Foundation) and his wife Camilla Duchess of Cornwall often visit.

A new visitors centre was opened in 2007 and, in its first year, some 29,000 visitors explored the castle and the extensive gardens, particularly the shell garden where the Queen Mother used to sit with her corgis in the afternoons, and sampled the home-grown fare in the award-winning tearoom – much of which comes from the castle gardens and adjacent lands. In the walled garden you will find a lookout tower which is a great place to take in the scenery. There is also a small museum and quite a large gift shop.

The castle is still very much as the Queen Mother restored it and has seen little update since then (her motto was ‘if it works don’t fix it’!). The knowledgeable guides will do all they can to make your visit interesting and enjoyable and are happy to answer any questions you may have. It must be kept in mind that the Castle of Mey is an historic building and disabled access is not possible to all parts of it although the shop, tearoom and toilets are fully accessible.

A big part of the castle’s attraction, especially for children, is the animal centre. Its relaxed and welcoming atmosphere can be enjoyed by adults and children alike and gives the opportunity to see how animals should be cared for. 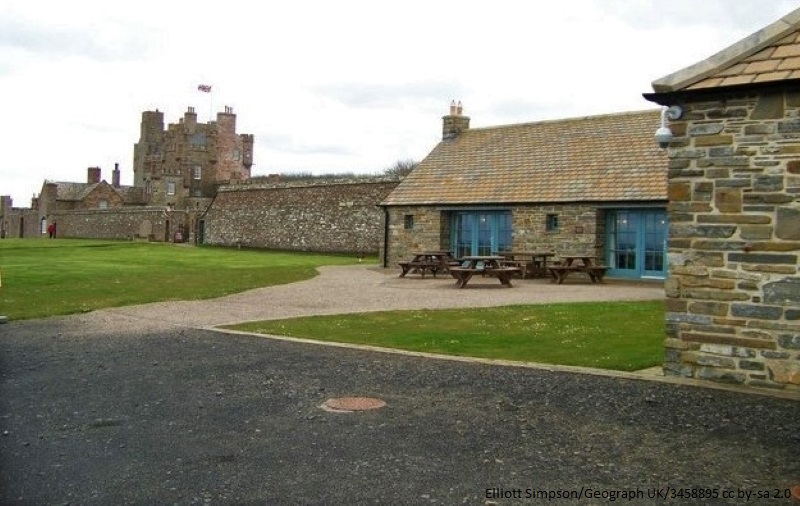 Visitors to the animal centre in the east woods can interact with some of the animals, providing an enjoyable and educational visit. There is a colourful collection of unusual and eye-catching poultry breeds, various waterfowl including ducks and geese and unusual sheep breeds in the paddock. The different sizes, shapes and colours of all these creatures make a curiously wonderful display. At the right time of year bottle-feeding of young lambs is a highlight and, with a little luck, your visit will coincide with a new hatch of chicks – fluffy, yellow balls of new life!

Two unusual features of the animal centre experience is the opportunity to try your hand at spinning fleece from the castle’s flock of cheviot sheep or attempting to milk Daisy the wooden cow! These are both popular activities and, depending on how busy it is, you may have to wait a while for your turn. Demonstrations are normally held three days a week during opening hours.

For a romantic wedding with a difference the castle visitor centre offers itself as a wedding venue with facilities for up to 60 guests in the grounds of the castle overlooking the Pentland Firth. Photographs can be taken in the visitors centre, the castle or the gardens. It is also possible to hold the wedding ceremony elsewhere and have the photographs taken in the castle and gardens. Weddings are confined to those months when the castle isn’t open to the public but, considering that the castle is only open for part of the year, that still leaves a good choice of dates.

Only a few hundred yards from the castle the Captain’s House offers quiet self-catering accommodation. It is the only property on the castle estate which is used as a holiday let and was a favourite picnic spot of the Queen Mother. A large conservatory overlooks the enclosed garden and gives excellent views over the Pentland Firth. It’s a great place for reading, painting or simply chilling out and appreciating the solitude and the breathtaking views.

For those of a more active nature the Captain’s House is perfectly situated for walking, bird watching or fishing with sheer cliffs and sandy beaches all around and Gills Bay, from where you can take a ferry to Orkney, is just a mile away. Equipped to a very high standard the Captain’s House has one double and two twin rooms and can sleep six people.

Opened in 2019 the Granary Lodge offers luxury bed and breakfast accommodation on the castle grounds. This is an ideal place to witness the impressive sunsets visible here and, if you are lucky, the evening sky may be enhanced by an appearance from the ‘Heavenly Dancers’ – also known as the Northern Lights or the Aurora Borealis to help make you stay just that little bit more special. Be it a day trip or a longer visit, the Castle of Mey and its surroundings cannot fail to impress!

Thinking of visiting Scotland but don’t really know where to start? Or maybe you’ve already done the castle trail, the whisky trail, and the city experience and now you want to see more of the real, wild Scotland. So what’s the best way to see Scotland’s amazing scenery without confining yourself to one or two relatively small areas?

Beginning in Inverness this circular route can be done in either direction depending on which order you want to see the magnificent scenery it reveals to you. From narrow, single-track roads with passing places to long stretches of lonely road where, at times, you will hardly meet another vehicle, the North Coast 500 winds its scenic way around long, narrow, sea lochs where well-positioned parking places offer stunning views of cliffs, sandy almost inaccessible bays and misty views of distant islands.

From numerous vantage points around the route you will have the chance to see dolphins and whales of many different species, ever-present seals and many species of seabird as well as the recently reintroduced white-tailed sea eagle (the largest bird of prey in the UK and the fourth largest in the world).

Although mainly a coastal route the North Coast 500 does loop inland in places and there is a 60-mile cross-country section from Inverness in the east to the Applecross peninsula in the west giving you the opportunity to see some of Scotland’s beautiful inland lochs and mountains (you must pause at the head of Glen Docherty to gaze in awe at the view west to distant Loch Maree) as well as the chance to spot Scotland’s iconic bird, the golden eagle, soaring its way along the flanks of a hill and disappearing into the mist.

Along the route you will pass through scattered settlements and villages often with only a handful of houses and a couple of dozen inhabitants as well as larger towns although the biggest still does not exceed 10,000 people. Although it’s only 500 miles the North Coast 500 can’t be done in a couple of days. To do so would miss out on much of what the route has to offer.

There’s the Black Isle (not an island at all), John O’Groats at the tip of Scotland, unforgettable mountain scenery including Ben Hope (Scotland’s most northerly Munro), the bizarre-looking steep-sided ridge of Suilven, the fairytale castle of Dunrobin, Ardvreck castle ruins and Achmelvich and Dornoch beaches both of which, when the sun shines, will rival any caribbean beach. These are places to savour, not whiz past in a rush.

Spreading your journey over several days will give you the chance to sample the best which Scotland has to offer in the way of cuisine and accommodation and offers opportunities to divert a little from the route to visit places of special interest to you. It’s no wonder that the North Coast 500 route is regarded by many to be one of the best coastal trips on the planet! You may also wish to take some time to explore your starting place, the city of Inverness with its wonderful bridges over the river and its informal coffee shops and cafes. Inverness is also the place where, allegedly, the clearest English in the United Kingdom is spoken!

If you would love to experience this route but don’t want to organise it yourself or are reluctant to drive yourself (those single-track roads can be awkward if you’re not used to them or to driving on the ‘’wrong’’ side of the road) then don’t despair because there are travel companies which can chauffeur you along the route – either part way or all the way – enabling you to devote all your time to marvel at the passing scenery. Travel itineraries vary and you can choose from full-on luxury hotels to basic camping, travelling by either four wheels or two – including by bicycle.

Whichever direction you decide to take out of Inverness –  north up the east coast or west to Applecross – you will have an unforgettable journey and if you are sufficiently impressed by the North Coast 500 (and you won’t fail to be) then maybe you’ll come back next year and do it the other way around!

The North Coast 500 website has suggested itineraries, where to go, what to see and do and a very useful interactive map which shows accommodation and attractions all round the route. You really must take a look.

All pictures courtesy of Pixabay.com CC0