Corrieshalloch Gorge: ugly in name but not in nature!

Some 12 miles or so southeast of the west highland town of Ullapool you will find that deep slash in the landscape known as Corrieshalloch Gorge. 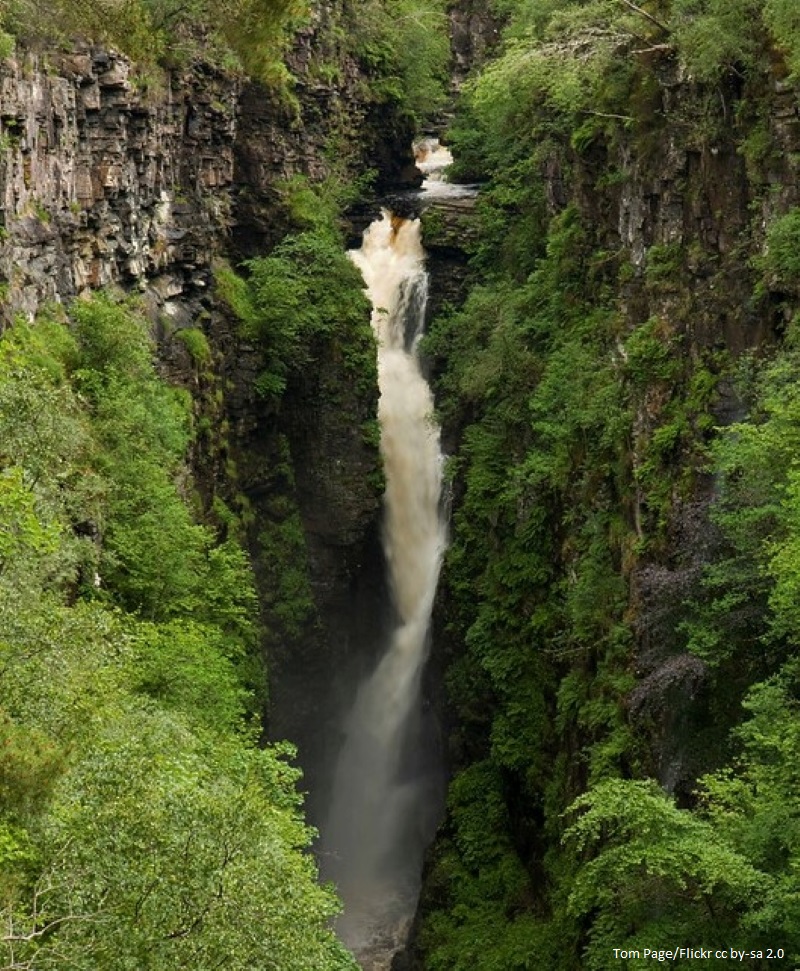 This narrow, mile-long box canyon demonstrates how erosion by meltwater from glaciers can lead to the formation of deep gorges. The river Droma runs through Corrieshalloch heading towards Loch Broom, tumbling over the 150-foot high Falls of Measach on its way, as well as numerous smaller waterfalls. For once, visitors to this breathtakingly deep gorge will be glad of Scotland’s rainy reputation. There aren’t many outdoor attractions in the highlands best seen after heavy rain but Corrieshalloch Gorge is certainly one of them – the cloud of mist produced by the waterfalls when they are in full flow almost obscures the view! 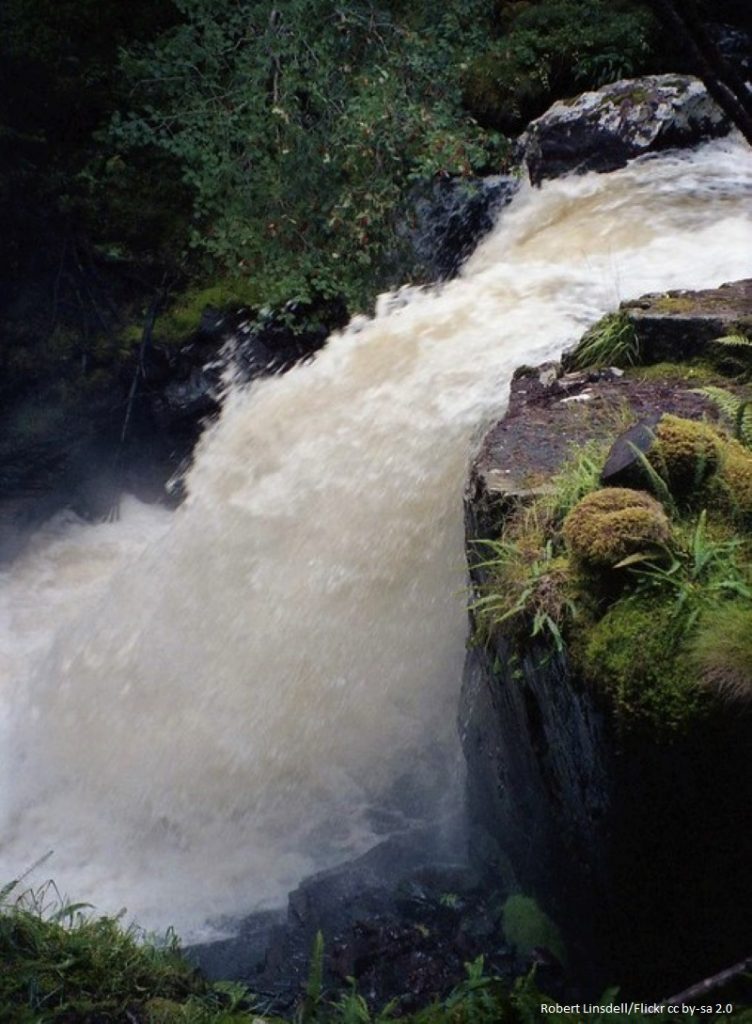 Corrieshalloch Gorge, whose name means the ‘ugly gorge’, is owned by the National Trust for Scotland and is a National Nature Reserve and a Site of Special Scientific Interest. It’s sheer walls have protected it from incursions by Man making it a refuge for rare species of plants which have largely disappeared from the surrounding areas due to human activities. The dark, humid walls of the gorge form a habitat for ferns, mosses and several species of plants which are otherwise rare in this part of Scotland. The more sunlit slopes higher up the gorge support many types of tree and there are insect species here which are rarely seen elsewhere in Scotland. In springtime look for the ravens which nest on a ledge near the bridge. 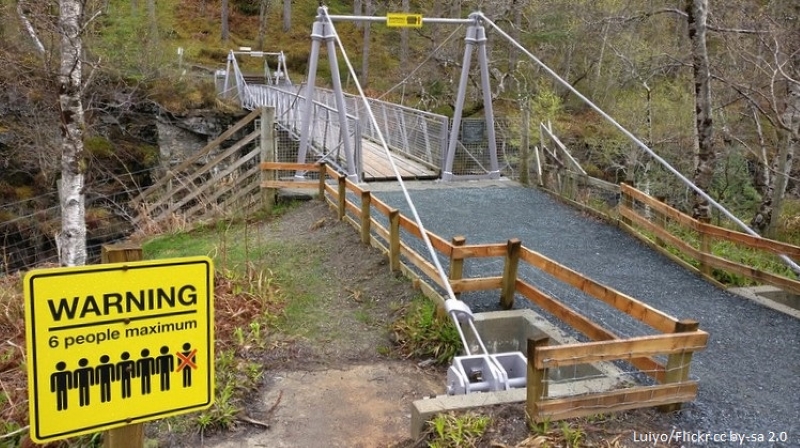 There are two ways for visitors to explore the gorge. A descent must be made down the fairly steep (but well-maintained) gravel path from the car park on the A832 on the south side of the gorge. This leads to the Corrieshalloch Suspension Bridge, a 25-metre-long footbridge spanning the gorge downstream of the Falls of Measach – but only cross that bridge if you have a good head for heights! The bridge doesn’t look all that solid and, in fact, it has a tendency to sway when anyone is crossing. Visitors’ confidence isn’t helped by the sign which has been erected at the bridge – it warns that no more than six people should cross at one time!

Those who suffer from vertigo may struggle here but crossing the bridge is a thrilling and rewarding experience as the Falls of Measach thunder down below. Once over the bridge turn left and it is but a short walk to a viewing platform which juts out over the gorge and gives a magnificent view of the waterfall and along the gorge. Again, anyone who suffers from vertigo may not be entirely happy here! 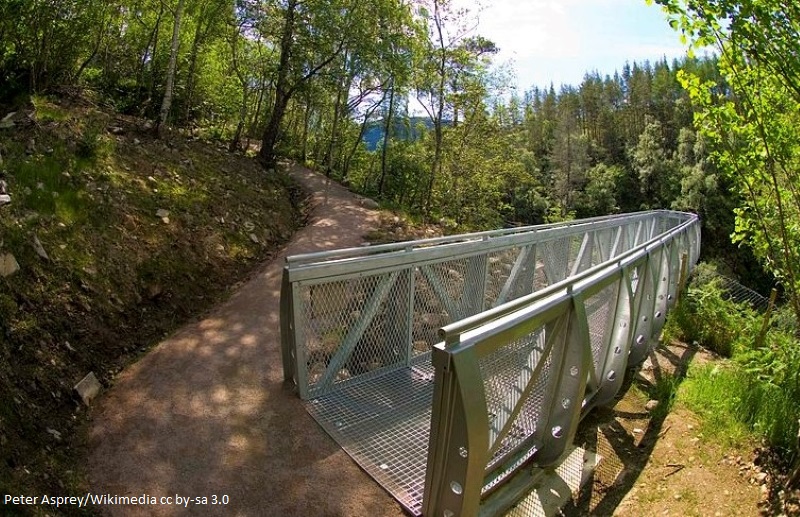 The other option (some would say the more level-headed option) is the one-kilometre or so long trail (known as Lady Fowler’s walk) which starts from the suspension bridge (before you cross it) and wends its way along the gorge to a viewpoint from where it is possible to see Loch Broom, into which the river Droma flows, in the distance. This trail continues on through woods for a bit and then loops back around to the suspension bridge via the gorge viewpoint.

Over 70,000 people visit Corrieshalloch Gorge every year and we can be pretty sure that none of them would describe it as ‘ugly’. The gorge can be a treacherous place especially after rain so do supervise children closely and if you take the family pooch it’s best to keep it on a leash at all times.