In a sheltered position in the Firth of Lorne on the west coast of Scotland you will find the ‘’Little Bay’’ of Oban. 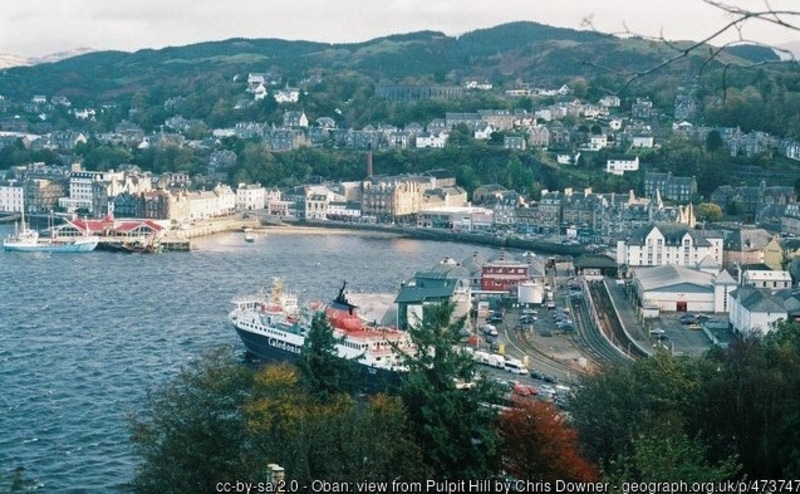 From its beginning as a small fishing village, today’s bustling town of Oban is now the main departure point for ferries to the Western Isles and much of the west coast of Scotland and during the height of the tourist season its normal population of about 9000 people swells to more than 25,000 most of whom stay for only a few days before moving on.

But Oban is far more than a mere stopping point or way station on a bigger journey. This picturesque town, lying in the horseshoe of Oban Bay, is full of history! The ruins of Dunollie Castle occupy a fortified position to the north of the town. With its roots in the early middle ages it has seen much strife and was, for many years, the most important fortress of the Chiefs of Clan MacDougall. It is now run by the Dunollie Preservation Trust and is open to the public. 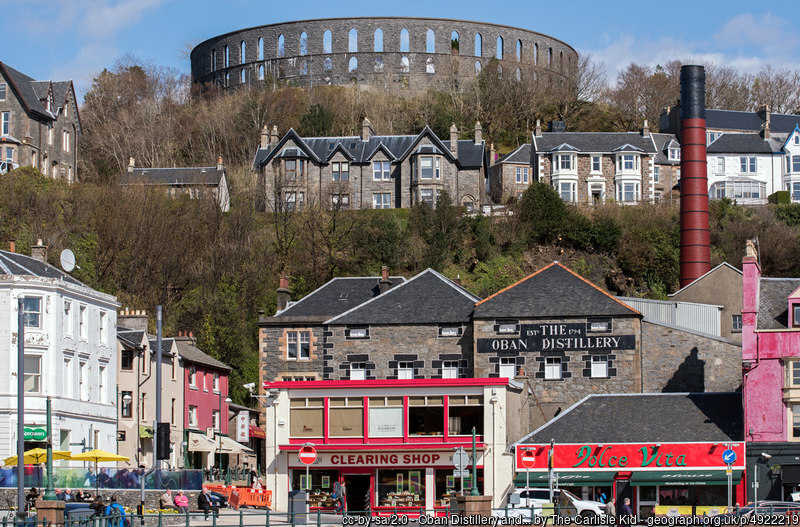 Prominent in the town, especially for those who arrive by sea, is a tall, red chimney with a black tip. It belongs to the Oban Distillery which is one of the very few distilleries in Scotland located in an urban setting, as it is, being just off the main road (A85) which runs along the seafront, making it one of the easiest to access and possibly the most-visited distillery in Scotland. Well worth a visit, Oban Distillery goes back to 1794 and was a major factor in the early development of the town. It is now owned by the Diageo group and has been designated a 5-Star Visitor Attraction by VisitScotland.

Oban has no fewer than two cathedrals. The red stone building of St John’s Cathedral, lies on the main road into Oban from the north. It is the Cathedral of the Scottish Episcopal Church. The other one is St Columba’s Cathedral. Situated on Corran Esplanade it is the seat of the Roman Catholic Bishop of Argyll and the Isles. The interior of both of these cathedrals is a ‘’must see’’ for every visitor to Oban. Located near the town’s north pier is Oban War and Peace Museum. Occupying the ground floor of what was once the local newspaper building, the museum offers visitors the story of Oban in wartime and in peacetime and is full of fascinating facts about the local area. There is no charge for admission to this completely independent museum which is run mainly by volunteers so don’t forget to buy something from the gift shop! 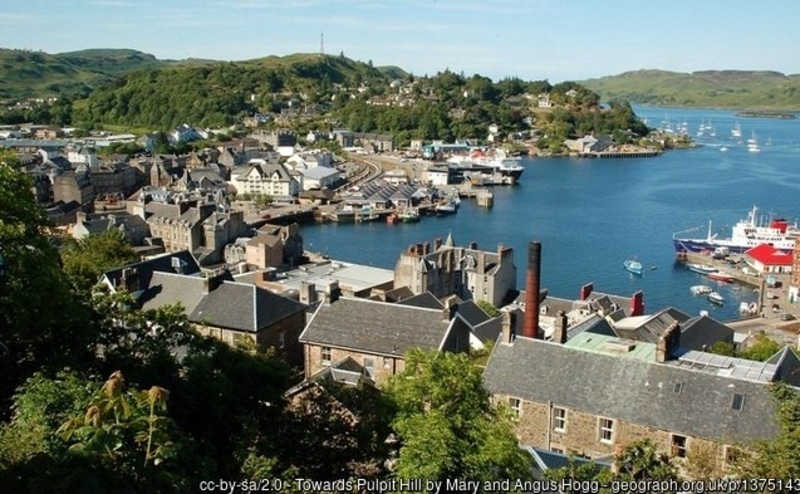 Probably the most prominent feature of the town is the Listed Monument of McCaig’s Tower, often known as McCaig’s Folly. Modelled on the Colosseum in Rome this unfinished structure stands on Battery Hill behind the town and is a favourite subject of the postcards for sale in the local shops. Intended as a family monument the tower was built by a wealthy banker, John Stuart McCaig between 1895 and 1902. His motives weren’t entirely selfish though. It was also his intent to provide work for local stonemasons. McCaig’s Tower is accessible by road (keep your eyes peeled for the signs – some of them aren’t easy to spot!) or, for the energetic, it can be reached by a hard ten-minute uphill slog from the town centre. First time visitors to the tower are in for a surprise. Inside, a grassy hillock provides a quiet public garden as a respite from the busy town and the location is a magnificent viewpoint from which to view the town of Oban and the bay and (if it isn’t too misty) further afield to the isles of Kerrera, Lismore, Mull and the peninsula of Morvern.

Speaking of viewpoints there is another excellent place from which to see Oban and the surrounding area. Pulpit Hill, to the south of the harbour is less than 300 feet high but offers great views. It’s a little harder to reach than McCaig’s Folly but is well worth the effort. There is a viewpoint indicator on the summit which points out various interesting features visible from the top. You can drive pretty close to the top and walk the last few yards or there is a path from a
point near the harbour. If you choose to drive be aware that the road is largely single track with passing places and some sharp bends. Care is needed to avoid oncoming traffic. 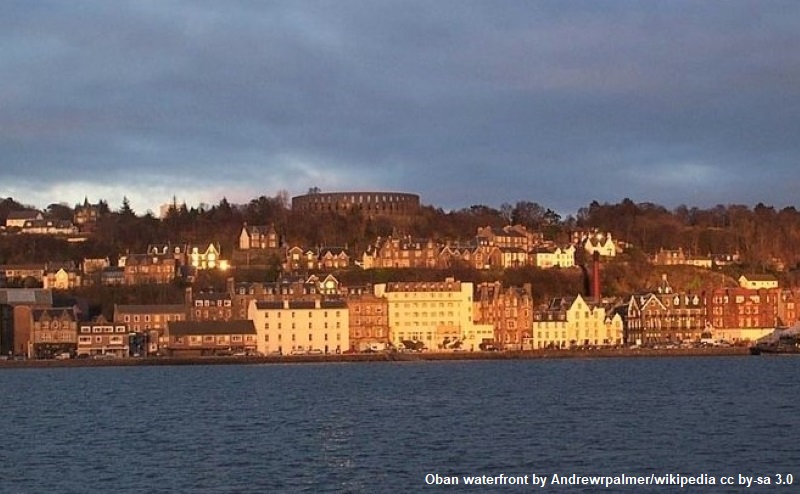 Oban is also a major centre for those who enjoy sailing pleasure craft along Scotland’s west coast. Oban has a large marina but, curiously, it isn’t in Oban! It’s actually located on the island of Kerrera, the large island which shelters Oban Bay. There are several other smaller marinas in the area and transit berths are available at Oban’s North Pier. The town also retains a significant fishing fleet. 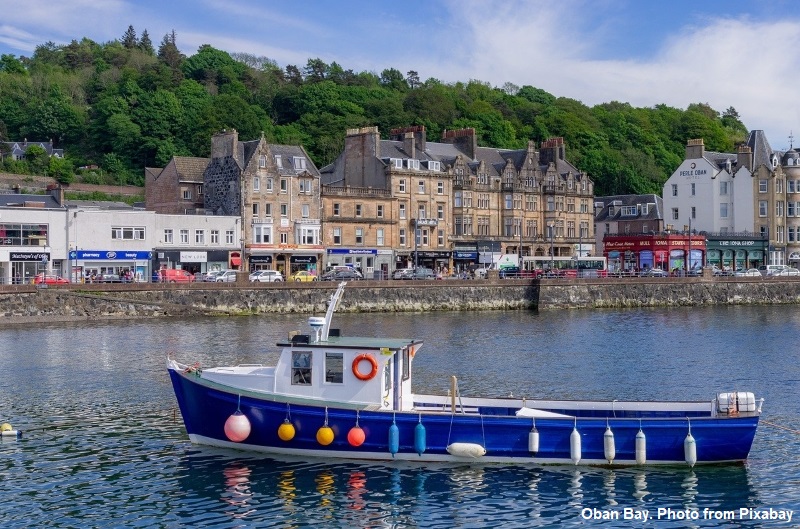 Oban can be a busy and crowded town at times but visitors are well catered for in the shape of the many hotels, restaurants, cafes and bars to be found and there is nothing nicer than finding a strategically-placed coffee shop or hotel bar from where you may sip your favourite beverage, look out over the bay and wonder to which of the many hebridean islands that ferry is going. Just thinking about it might make you want to jump onto the next one leaving the harbour!

And here is a video from Youtube, showing Oban: